NYT: A Tough Sell at Sears

In random recent news, Everlast (athletic brand) has signed a deal to be sold at Sears/Kmart stores. But, here's a very nice article from this week's New York Times - Sears Struggles Five Years after Merger with Kmart.

From the New York Times, a look at the current state of Sears Holdings:

A Tough Sell at Sears

Update: EXTENDED HOLIDAY STORE HOURS: Most Kmart stores nationwide are open 6am until MIDNIGHT this week (the week before Christmas). The few remaining Super Kmarts are mostly open 24 hours as usual.


Following up from the Black Friday sales, SHLD has not broken out the details publicly, so we aren't sure how Kmart fared. Both SHLD and Walmart are no longer providing some of the sales data that they used to. But, in comparison, a low-performing very slow Rite Aid store makes around $20,000 in sales / week (non-prescription) - around $1 million/yr in sales. That's probably the same amount a slower Starbucks does in a year. From our estimates using Wal-Mart official sales data, averaged over 711 traditional stores and 2898 Supercenters but not counting Neighorhood Market, Sams Club, or international stores, we think a Wal-mart store makes around $200,000 on an average day, for around $72 million / year in sales. Optimistically, in 1994, Super Kmart was expected to hit $80 million / year in sales per store. Of course, by 1998, sales per square foot at Super K were around $330 (pretty good compared to now), with Kmart's supercenters raking in approximately $4.3 billion a year, or about $43 million per store. In 1998, Wal-Mart Supercenters did about $32 billion this year, or about $60 million per store for ~550 stores, while Super Target, with 18 stores, will do volume estimated at $800 million this year, or $44 million per store.


Anyway, we'll save our Super Kmart analysis/history/photo post for 2011. And we'll do a "Seismic Shifts in Retail" layman's analysis post in 2011. And more Kmart Photo Blog Posts, of course. Stay tuned! And don't forget to vote for your favorite Photo-post of 2010!


Finally, if you ever want a photo-post of your store with pictures you submit, just email your photos (please, .jpg /.bmp / .gif/ other acceptable formats, no Zip folders, no viruses) , any commentary you want up, and the name you want to appear as the attributed author on our site to SuperKmartBlog {a t] g ma i l (do t} com. That's SuperKmartBlog - not SuperKmart, since that account was already taken. Cheers!


From comment by reader Daniel C: "As a sales associate for 4276 in Toledo, OH, I hope I can help you fill in on some details.

Our staffing level is roughly 70 permanent employees with around 30 temporary associates hired for October through the second week of January.


So naturally, we were curious. At first we thought this was Daniel's store: 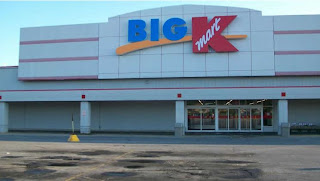 
Another Kmart in Toledo is his store!

photos of KM4276 taken from Microsoft/Bing Maps.
Posted by kmart 5 comments: Links to this post

We'll update this post when the Black Friday /Thanksgiving week sales scores are out, but in speculation of SHLD's open-for-Thanksgiving strategy, there have been mixed reports of some Sears and kmart stores with "100's" of people in line, and others with more employees than shoppers. Sears was open for the first time, it claimed, on Thanksgiving, from 7am-12pm, while Kmart continued its new tradition of opening on Thanksgiving, until 9pm!

Given a typical Kmart store's permanent staffing of 50 to 120 employees, likely averaging around 70, it would be highly difficult to staff the store at full crowd-control level on Thanksgiving and Black Friday, especially given the extended hours, and especially given the need to de-clutter/restock/reprice items in the store in between (and during!) the busy days. Anyone know how many temporary staff were hired per store? Or what the Black Friday week results were? Kmart was prominently featured on several news reports, including NBC Nightly News, during their annual news-filler on Black Friday shopping, and Sears received a lot of publicity for being open on Thanksgiving.

Finally, Sears stores are seriously lagging in sales, so we wonder how much of a boost Black Friday was. Apple sells $11.8 million per store, Best Buy $9.1, but Sears only $2.3 million sales per store. Granted, only 18% of Apple sales are in its stores, but still, Sears stores generally are underperforming by most metrics, including sales per square foot, and profitability. It will take a great Thanksgiving to return Sears and Kmart to consumer minds, something increasingly difficult given the lack of investment in most of SHLD's stores.

Anyway, we'll update this post next week with more sales results. And next month, more Kmart store pictures!
Posted by kmart 2 comments: Links to this post