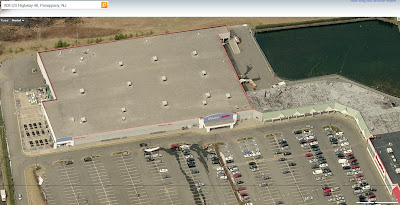 Well, it seems like perhaps the first new Kmart will be opened in almost a decade. Oh wait, it was a Kmart. Never mind, just converting a Sears Essentials (that was itself converted from a Big Kmart) back to the Kmart banner. (See our previous blog post on the miserable failure that Sears Essentials is/was. Great potential, terrible execution...) I wonder if this "conversion" will involve a major makeover, or just some cheap new signage. Hopefully, they will use this opportunity to explore with fresh & appealing designs (aka Walmart's "Project Impact") and add an expanded grocery section (aka Target's "pFresh"), but cross your fingers, for Sears management isn't particularly known for retail ingenuity in the 21st century. In other random news, a newspaper article from Columbia, TN states that Sears is replacing its closing mall store... with a Hometown franchisee a couple blocks away. Uh, sure a Sears Hometown store is better than no Sears, but a Hometown store is a fraction of the size...


From the Dailyrecord.com:
PARSIPPANY — Sears Holdings Corp. confirmed on Thursday that it was converting its Sears Essentials store in Parsippany back to a Kmart. The building at Arlington Plaza on Route 46 West was built and opened in 1998 as a flagship Kmart store, which was featured in a high-profile national advertisement that also included a staged parade in Boonton led by Penny Marshall and Rosie O'Donnell. It was rebranded as a Sears Essentials store after Kmart Holdings Corp. purchased Sears, Roebuck and Co. in 2005, creating the company known as Sears Holdings Corp.

"We found that the popularity of Kmart resonated better with the customers, so we are changing it back," said Sears Holdings Corp. spokesperson Kim Freely.

Freely said the store will close for two days following the liquidation sale that began on Sunday. It will then soft-open as a Kmart on March 24, with the grand opening scheduled for May 28.