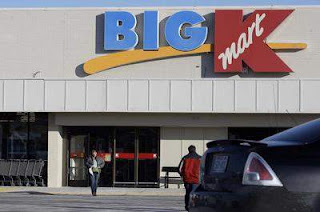 Welcome to SUPERKMARTBLOG 2011!
This is your source for entertaining Kmart commentary, all unofficial and not related at all to Kmart or Sears Holdings.
Thank you for visiting our site too!
Super Kmart Blog!
So according to our poll in the month of December 2010, our most popular full photo-post of 2010 was the "Smallest Kmart stores" - thanks for voting! Second place was the Fremont, Ohio Super Kmart Center post. We didn't include posts that didn't feature lots of photos (like this one) in the voting.
So, now to 2011: The News


More Kmart (at least 6 Kmarts and 2 Sears Essentials) and Sears store (at least 12) closings. No surprise here, the company is still struggling, and given their tremendous under-investment in stores (capital investment total and per store and really by any measure is far below that of rivals including Wal-mart) and increasing competition from Amazon/online sellers, dollar stores, drugstores, and traditional rivals like Wal-mart and Home Depot, the future still remains in doubt for Kmart and Sears. Granted, SHLD is trying to adapt and evolve new features, such as online digital movie rental/sales, and electronics/"Blue Crew" social media blogging, but overall, the stores are sagging... and seems like SHLD no longer has Press Releases to announce these more than annual events...
Kmart store closings: Wisconsin, Utah, Ohio, New Jersey and at least two in Illinois. Going-out-of-business sales will begin Jan. 16, and the stores will close April 3. 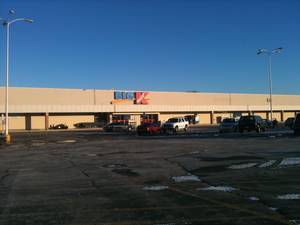 Some of those closing: 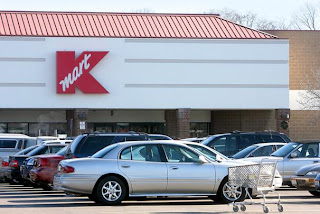 Kmart at 1780 Erie Highway South, Hamilton OH. This store currently has 79 employees and a "new" logo on the street signage.

Big Kmart at 1268 Highway 22, North Plainfield NJ 07060. This store has 64 employees. It also has very interesting parking lots, in that the majority of the parking for the plaza is on either sides rather than facing the stores.

Big Kmart at 10205 Grand Ave, Franklin Park IL. This store, next to Chicago O'Hare International Airport, was built in 1975 and employs 92 people, and is next to a Jewel-Osco supermarket. 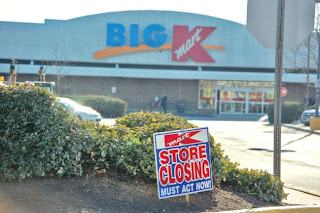 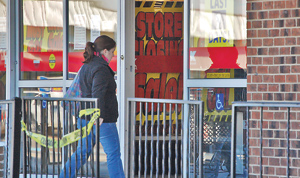 Kmart store at 70 Cherry Tree Center, Washington IL 61571. This store was one of the five lime-green "prototype" Kmart stores that were converted in 2002 (or 2003?) after the Kmart bankruptcy. Three of the other lime-green stores were in Illinois also, in Peoria, Morton, and Pekin; while one was in White Lake, MI. This store was built in 1981 and employs 71 people.


An set of photos of the prototype store in White Lake can be found on this Flickr page: 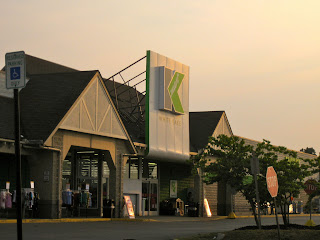 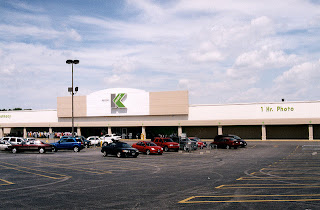 and here is one from user PlasticFootball of the Pekin Kmart store, similar to the Washington one that is closing. The Pekin store will remain open. 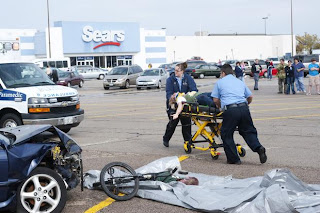 Sears (Essentials?) at 3315 Court Street, Pekin IL. This store, which employs 79 people, was one of the first Sears Essentials prototypes (sigh... failure of execution of concept by the lack of investment) and opened in 2004 in a former Wal-Mart building (the Wal-mart built a new Supercenter down the block). However, the exterior signage only has Sears. Interestingly, it is just down the road from the Pekin Kmart store, and both remained opened during the time this Sears was in operation. Don't worry, this photo from the PekinTimes was of a DUI Safety Demonstration, and not a real accident. Don't drink and drive, folks!


Digital Movie Sales:
Sears and Kmart are entering the digital-movie rental and sale industry with the new online video store Alphaline Entertainment.
The retailers, both owned by Sears Holdings, charge per title, making the service less like Netflix's subscription model and more akin to Apple's iTunes, except that it's not yet available to Mac users.
Television episodes sell for $1.99, while movies sell for $19.95 and rent for $3.99. Most content cannot be burned to a DVD, but users can watch their rentals and purchases on a TV screen connected via S-video jack to their PC. Alphaline uses the RoxioNow platform, which also drives Best Buy's CinemaNow, so the services have much in common, including available film and TV titles.
"Blue Crew Blogs"
Just in time for The Consumer
Electronics Show, the world's largest technology tradeshow, Sears consumer
electronics launches a new social media initiative called the Sears Blue
Blogger Crew, which is dedicated to providing knowledgeable, industry
bloggers the opportunity to engage in consumer electronics announcements,
events and activities throughout the year. The goal of the Sears Blue
Blogger Crew initiative is to provide enthusiastic bloggers with new
resources and early access to consumer electronics information, so they can
further report, blog and interact with their social media communities about
the latest technology news.

And finally, some photos of closed Super Kmart Center store in Texas at this other retail site:

http://southernretail.blogspot.com/2011/01/retail-district-of-humble-texas-2010.html
Upcoming soon this year on SuperKmart Blog: Store photos from Orlando and more; a look at Sears' many concept stores; an analysis of the remaining Super Kmarts / Supercenters; guest blog posts; and more!
Posted by kmart 38 comments: Links to this post