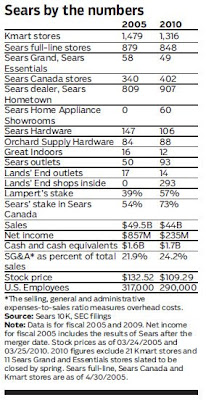 As you can see, the number of full-line (normal) Sears stores, Kmart stores, Super Kmart Centers, and some other minor brands (Sears Grand/Essentials, Sears Hardware, Great Indoors) have decreased. The number of franchisee-type Sears Hometown stores has increased, as has Lands' End kiosks inside Sears. We will see how the decision to make exclusive brands such as Craftsman available to other retailers will bode for Sears.

The exclusive Country Living home collection has replaced Martha Stewart Everyday lineup in Kmart stores. It's tough being in the shadows of Walmart and Target, especially when it comes to dealing with suppliers (for example, Walmart accounts for over 21% of sales for some consumable companies like Kelloggs), but Kmart does still have around 1,300 stores and $16 billion in sales a year. Indeed, Kmart is over a third of Sears Holdings and while Sears Holdings has lost almost a third of its share in the $2.99 trillion retail market to 1.4% last year from 2.1% before Kmart and Sears merged, it is still big. (For comparison, Wal-Mart's share jumped to 10.2% from 8.7%)

Kmart is launching an exclusive apparel line with Disney Channel teen star Selena Gomez - trying to raise the coolness factor of its clothing lineup to be more in line with popular Target or even the Miley Cyrus line at Walmart. In fact, the Gomez/ Dream Out Loud line sales are hoped to be around $100 million for the launch year!

For its exclusive adult clothing line-up, Kmart is pushing a relaunched classy Jaclyn Smith brand for women, described as “classic feminine styling, quality fabrics and ease of fit". The attention brand is for sophisticated, contemporary looks. The Route 66 brand is for jeans and vintage looks. For men, exclusive brands include golf-style Top Flite and Piper and Blue casualwear.

All in all, Kmart's clothing department seems to be getting more souped up, trying to be as "cool" as Target while boasting "Everyday Great Prices". A dedicated website, Kmartdesign.com , shows off Kmart's 250+ design team. It seems this part is working... nicer clothes at affordable prices, and for stores that are nice inside, it should be a success. The only issue would be if aging stores still remain off-putting for people to venture inside - something management does not think is a problem but most Wall Street analysts deride (lack of capital reinvestment in store remodelings). We'll see who is right...